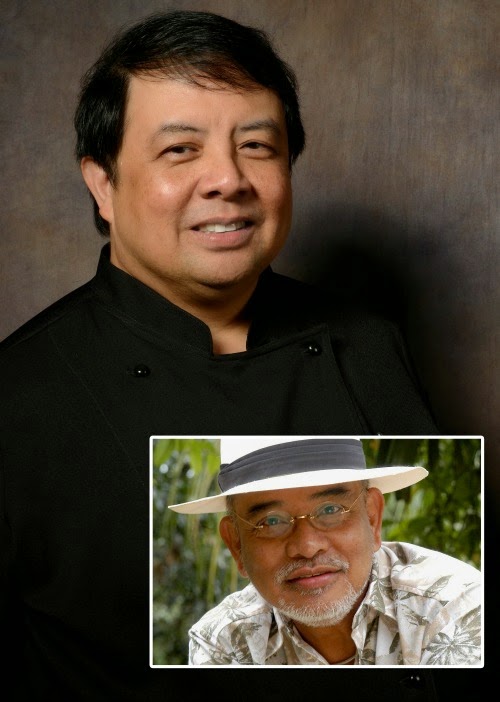 Mention the name Larry Cruz and you right away think of iconic restaurants Café Adriatico, Bistro Lorenzo, Bistro Remedios, Bistro Burgos among others.
The list continues with Ang Hang, Larry’s Bar, Café Havana, Bollywood, Camp Gourmet, Paper Moon, In the Mood Dance Bar plus the more recent Fely J’s, Lorenzo’s Way and Abe.
Larry Cruz is no longer with us but his legacy continues as the LJC Group makes sure that everything is as perfect as Larry would have wanted it.
On November 29, Saturday, 9am-1pm, The Maya Kitchen presents Chef George Lizares, the corporate chef of the LJC Group, in a cooking demonstration entitled “A Christmas Dinner Larry Would Love.”
Chef George will prepare Cheerful Feta and Watermelon Salad  (black olives, yellow and red watermelon with Italian dressing); Kingfish and Shrimps Curry in Coconut, (Tanigue fillet and shrimps gently simmered in Indian-style coconut cream curry sauce); Chicken with Three Mushrooms, (roast chicken with Porcini, Button and Shitake Sauce); Couscous with Seven Vegetable  (tender lamb morsels combined with chickpeas, zucchini, eggplant, tomatoes, carrots, capsicum and cabbage in a rich broth); and Baklava (filo pastry, nuts, butter and orange-infused syrup served with vanilla ice cream).
Chef George took inspiration from his long relationship with the late Larry Cruz who had been both a boss and a mentor to him. He started with the LJC Group in 1998 as a food and beverage manager. He left and came back in 2008 as corporate executive chef, left and came back again in 2011 up to the present in the same capacity.
Outside of the LJC Group, Chef George has had a long and stellar career in the culinary industry both here and abroad.  He has had stints with the Bistro Group, Julius Maggie Kitchen, Taal Vista Hotel, The Camp John Hay, Baguio Country Club, Tagaytay Highlands and even had the chance to work for the Royal Kitchens of the Sultan of Oman. Another foreign posting is with the Radisson Royal Palm Hotel, Australia.
The LJC Group was borne out of Larry Cruz’s decision to take a career change way back in 1979.  The journalist became a restaurateur. Larry’s indelible mark will forever remain in the history of Philippine cuisine. Every day, Chef George Lizares and the people behind The LJC Group continue to pay tribute to the man who cannot cook yet somehow managed to permanently change the country’s culinary landscape.
“A good meal is one that satisfies all the senses. …More than just looking good, it has to taste good…match the setting… More important for me, it should be enjoyed with someone.”—Larry J. Cruz
For more information on this and on other courses offerings, log on to www.themayakitchen.com  or e-mailcontactus@themayakitchen.com  or visit The Maya Kitchen Culinary Center every Tuesday to Saturday at 8F  Liberty Building, 835 A. Arnaiz Avenue (Pasay Road), Makati City or call 8921185 / 892-5011 local 108 / Mobile No. +63947 835 2290.
Press Release: This means that this material is fully and directly from the company issuing the press release. This also means that this website is not the author of the statement being read. The Cuisineuer is simply providing the information for readers who may be interested.
on 26 November