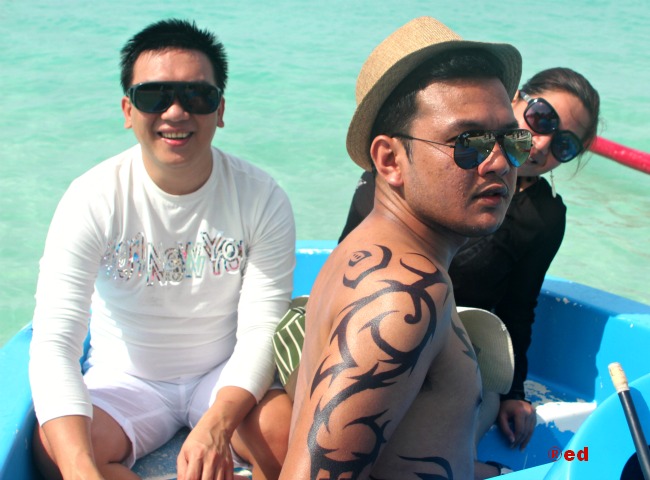 I know you were teased by my previous post about Rome's glimpse of Bellaroca. He and his cousins made sure that they have fabulous annual trip... and for this year it is Bellaroca. I'll keep that excitement a little bit longer until I'm done posting his adventures and exciting activities in Boracay with his bessies.... 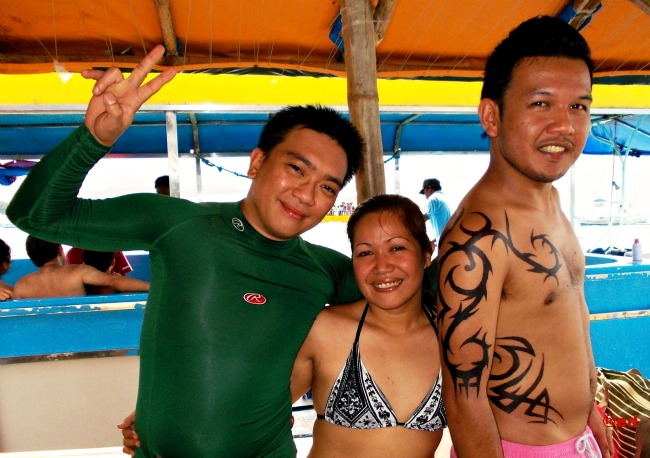 The bright morning light in Boracay gave them a promising day ahead. They were waiting for this day to finally achieve their perfect sun tan and have an ultimate tour of the island and be involved in different activities. Indeed, the real adrenaline action unfolded on that day. Their first stop? Helmet Diving! 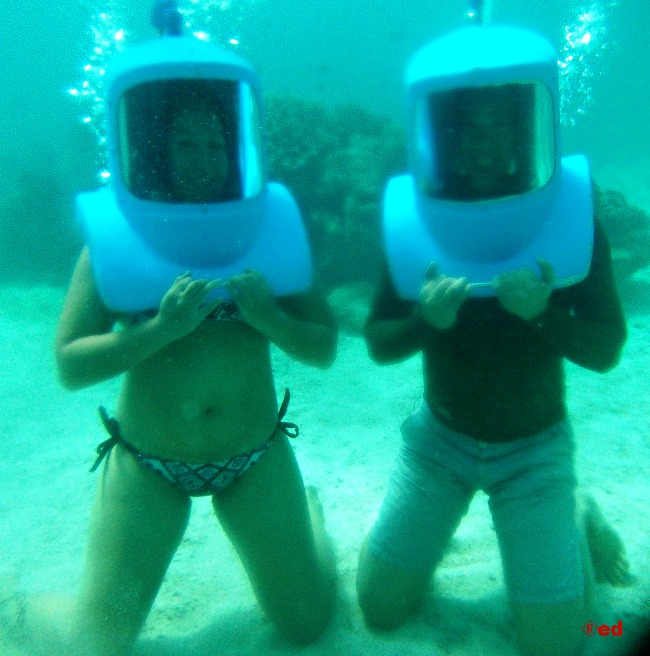 Helmet diving allows people who can't swim to explore the coral reefs and play with cute sea creatures without extensive scuba-diving training. A helmet diver could enjoy the different perspective of being underwater without the need to wear a mask or breathe from a regulator. The helmet device is continually filled with oxygen from an onboard tank while the user is in the water. Users do not need goggles, breathing apparatus or a wet suit and they can wear glasses, talk and even scratch their nose underwater. Helmet diving in Boracay is operated in 10 ft deep in a calm condition sites to prevent sea sickness. The package costs Php 300-500 for a thirty minute dive. Prices vary depending on how you charm your helmet diving operator, lol! It includes 50 souvenir pictures in a compact disc, speed boat ride to the site, assistance from 1-2 PADI qualified dive instructors, and a coordinator that escorted them to the boat pick-up location in station 1.

A three minute full view of the world famous shoreline put a smile on their faces as they headed to the diving site on a blue speed boat. From afar, the sky was clear and the seawater was colored in different shades of blue. Holidaymakers engaged on their chosen beach activities were scattered on the world's famous coastline. Although the speed boat ride was brief, they all had fun! When they arrived on a big bamboo raft that serves as diving station, they were given a ten minute briefing on underwater signals and precautions. 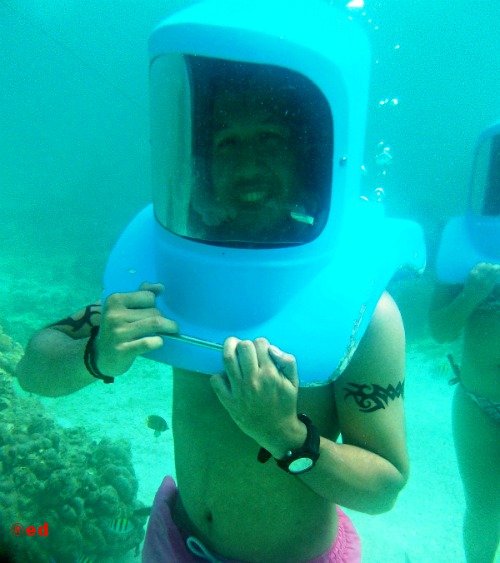 One by one, they climbed down a bamboo ladder until the water was at shoulder height,  once in this position a clear acrylic dome or helmet that has clear glass plates was placed over their heads. Rome was the last to dive in, he equalized the pressure in his ears before getting into the water. Like Rome, Josh and Carl are Palawenos too. So they all knew how to swim, its a requirement for being called oneself a true blue Palaweno, lol. The three of them were raised in the sign of water. Helmet diving however allows them to experience the sea to a new level. 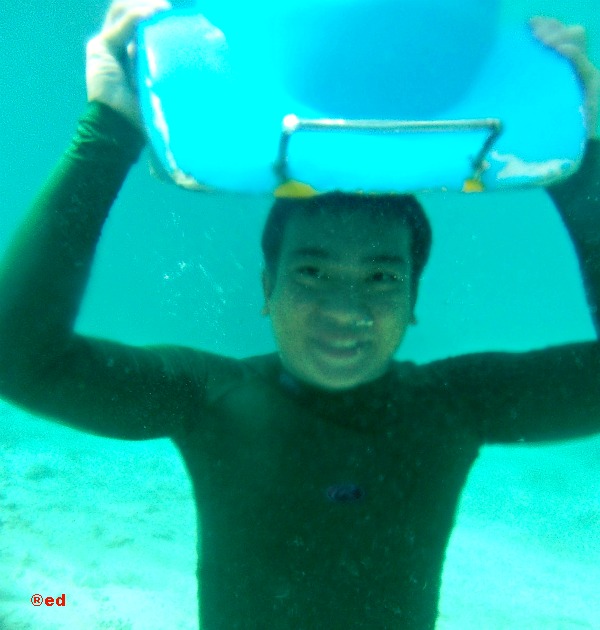 He took a panicky breath as the heaviness of his helmet pulled himself under. A school of fish was accelerating towards them. Carl's eyes widen and Josh has been screaming underwater. They hold Rome's hand, Josh's hands were shaking, Carl's face was white...they pushed Rome to the middle. All of a sudden, they changed direction inches from his face. In an instant they were gone.... they saw them hiding from the nearby coral reefs. 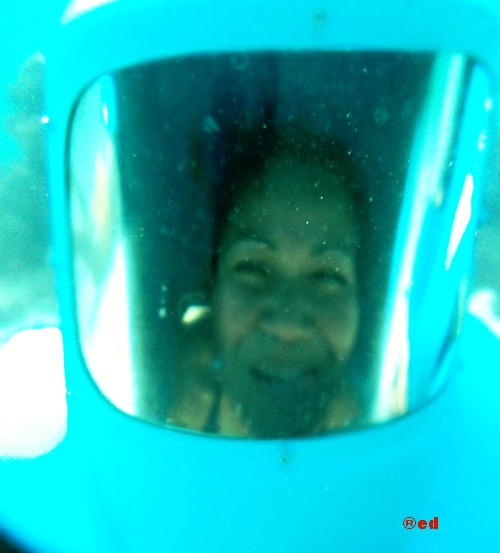 Once they were over with the initial fright, being in the water with different sea creatures was therapeutic. They feed the fish with bread crumbs, played with them and had their pictures taken. Carl, felt dizzy when the sea started to  uproar. He signaled their guide that he wanted to go up. Josh and Rome stayed for quite a while until they were tired. Helmet diving was a close-up view of underwater life and a unique memorable experience of a life time, they concluded. 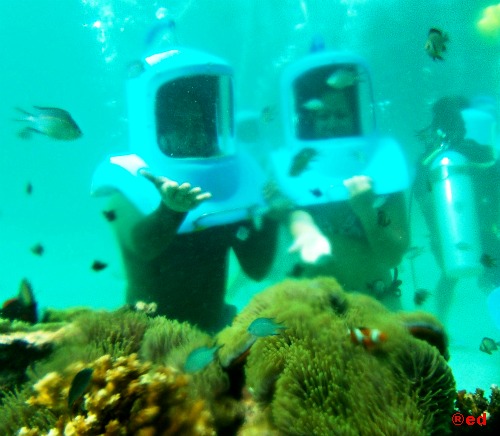 Some people use the term "reef walk" for helmet diving. Rome disagreed as he knew that corals has been formed for years and should not be walked on. He also noticed that operators failed to emphasize no touch policy on the corals. Holidaymakers were walking on it....damaged and dead corals were scattered on the sea floor. He hoped that Boracay's local government should take more bigger steps on this issue so he could still do diving on the next years to come.